Coping With a Limit Tester 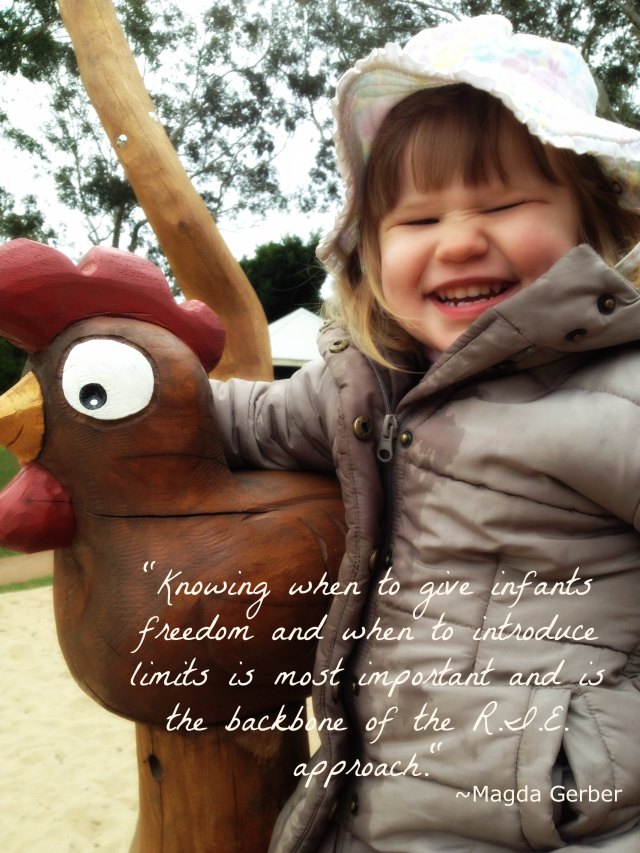 My two and a half year old is the ultimate limit tester. Her desire to be in control is so strong that it is quite rare to have her willingly cooperate for even the most simple of requests. ‘Lucy, in two minutes we are going to get dressed.’ ‘No, don’t want to!’ comes the reply. ‘It’s time to hop in the car, Lucy.’ Lucy responds by jumping on her trike and riding away down the footpath. ‘I won’t let you play with your food, Lucy’. Another forkful gets transferred into her drink cup.

These are just a few samples of how our days can often run. It can be a long and tiring road micro-managing a toddler like this for a day let alone day after day and night after night. Having said that, things have gotten a little less stressful here over the past couple of months as we have refined our limit setting and provided the clear boundaries Lucy so obviously needs.

In the beginning, using punitive discipline was what came naturally to me. Consequences including time outs, raised voices and even some light smacking were all used in an effort to change behaviours and let Lucy know what she could and couldn’t do. This changed pretty much overnight once we embarked on a respectful parenting journey.

The problem was, as novices in this parenting field and with a lack of clear direction for dealing with the testing behaviours, Lucy went from having strict parents with strong discipline techniques to parents who were so keen to mend the damage done to their relationship with their child, that they shied away from saying no and instead allowed Lucy considerable freedom to explore, investigate and develop autonomy in daily tasks. We knew we wanted to be respectful of our children but we had not yet developed effective techniques for coping with our daughter’s need to have firm boundaries set.

I would like to add in here that at the initial change in our parenting philosophy to follow RIE (respectful parenting), Lucy was about 18 months and although there were clear signs she was adept at pushing boundaries, at this young age the testing was not very intense and it could actually be quite amusing to us if it was a new behaviour and something that seemed out of the ordinary for her age  For example, asking her to come over to me so I can put her pants on and instead she gives a big grin and runs in the opposite direction resulting in a chase around the house. Or giving her a mouthful of food and her blowing it out like she was blowing a raspberry. In these early days, this seemed like a bit of harmless clowning around and so we were not really too concerned about setting firm limits.

As Lucy grew older, stronger, wiser and more defiant over the next twelve months, I started to realise that she badly needed some much more clearly set boundaries in order for her to be sure of her daily expectations so she didn’t feel the need to test all the time or so intensely. Her ‘harmless clowning around’ was starting to impact on everyone in the household as Lucy dictated the terms by which she would or would not cooperate at any given moment.

Some examples of these behaviours included downright refusing to get dressed in the morning, not getting into her carseat when we needed to go somewhere, being destructive in her play with toys, and throwing food or dumping it before she had even really started the meal. I know these are quite common behaviours for toddlers her age but for us it pretty much meant that from the moment Lucy woke until she finally went down at night we were in a battle.

I began reading all I could on limit testing and how best to manage it respectfully. The overwhelming advice provided was to offer choices to satisfy the toddler’s need for some autonomy and then follow through with natural consequences if issues still arose. This seemed like a simple solution to our problem and we implemented it immediately with instant success.

‘Lucy, would you like to wear this blue shirt or this red one?’ And she would obligingly choose and we would repeat this technique for every trouble spot during the day. Where to eat – at the bench or at the table, would she like to climb in her carseat herself or did she want some help etc. We became masters in empowering her with decisions and having her feel a little more in control of the things she had to do but which she was not thrilled about. After a time, however, she turned the ‘game’ back on us. Now she would happily choose the red shirt but would not want it put on. ‘Would you like to put it on yourself or would you like me to do it?’ ‘Noooo! I want the blue one!’ ‘Ok, lets put the blue one on.’ Noooo! The red one!’ Giving her the choice was now becoming part of the battle.

Similarly, to get Lucy into the car to go anywhere would begin with. ‘Would you like to climb in yourself or would you like me to help you?’ ‘I want to do it!’ ‘Ok, up you get’ then no movement. ‘It seems you need some help’ ‘Nooo! I want to do it!’ and then a very slow climb up into her carseat would end with her standing in her seat refusing to sit down. It was getting so stressful ‘negotiating’ with her just to get her into her seat and this type of scenario was frequently playing out in other aspects of our daily life.

It was this persistent and stressful car seat battle that made me re-evaluate how I was doing things. I knew then it was time to become more firm with setting limits. Lucy had too much freedom to negotiate and manipulate which was causing her to want to push the boundaries even more. I decided to offer Lucy an initial choice but restrict the game playing and manipulation by stepping in with a clearly defined natural consequence for not following through with the expected task.

I began by trialling this in the car. This is how I have changed my technique to set a firm limit:

Me: State the expectation – “Ok, up you get, sit in your seat”

Lucy: Climbs up but does not sit down.

Me: Set a firm limit with no room for negotiation – After waiting several moments for Lucy to sit down herself “I am going to give you three more seconds to sit down yourself or I will assume you need some help – 1, 2, 3”.

Lucy: Continues to stand in the car seat

Me: Follow through with the stated natural consequence – Amidst screams of protestation I would wrangle Lucy into her seat and hold her down whilst I got her straps on. This took a lot of force and physical effort on my part and did not sound nor feel very respectful at all. However, I have begun to realise that it is ok for my children to voice their disapproval at being made to do something. It is important however that I acknowledge their discomfort and displeasure in being forced in this way.

Ultimately, Lucy does not have an aversion to sitting in her car seat or going for car trips. In fact she really enjoys them. She had been crying out for a limit to be set. She was pushing me to see whether I was really a capable mother who could control her. Although on the surface she seems to revel in the power it gives her to control such situations, she is actually far more at ease and content when she is given less of this power.

Once I had followed through with this car seat technique for several consecutive car trips, Lucy became a lot less fierce in her fight and after about a week of doing this, she now climbs in and sits herself in her seat 90% of the time chatting away happily without me needing to say a single thing to her about what is expected – because she already knows with no uncertainty. In the other 10% of cases I believe she is just re-testing the water to see if I am still in control and if the limit still stands or she is tired or hungry or just irritable. As long as I am clear and consistent in my expectations, it never gets to the point where I need to wrangle her anymore.

I have had to tighten the reigns in this way for many situations throughout the day. I always offer Lucy the choice and the chance to have some control over the situation herself initially but once she has shown that she is going to test the limit, I step in and ensure she understands that this is the expectation and I will help her to make it happen.

It is so important for us as parents to find a balance between encouraging independence and autonomy in our children and ensuring they know that we can control them and are capable of stopping them when their behaviours become testing. Children feel a sense of security and comfort when we can take charge in this way. Of course, they will not show this appreciation and will actually protest rather strongly against it but I have seen a greater sense of calm come over Lucy in many of these situations now and certainly when embarking on car trips! She seems much happier knowing what is clearly expected of her and will sometimes proudly exclaim ‘I’m sitting in the carseat, Mummy.’ To which I simply reply, “I can see that sweetie, thank you for waiting for me”.

So as Lucy finds more limits to test in the future, I am confident in my ability to manage them respectfully, whilst still encouraging her exploration, autonomy and independence. I know that one day she will look back and thank me for being her strong and capable Mum.

Hi, my name is Kate. I have been a Physical Education/ Maths teacher for 12 years and am currently taking some time out to be a Mum. I have two beautiful girls aged 2 and 1 (13 month age gap). I have learned that there is so much more to parenting than 'going with your instincts' and treasure all the rewards my children present to me everyday. I have a passion for sports and have recently discovered an addiction to sewing. Thank you for taking some time out to read my ramblings :)
View all posts by Peaceful Parents, Confident Kids →
This entry was posted in Peaceful Discipline and tagged Discipline, Limit testing, Natural Consequences, punitive discipline, pushing boundaries, Respectful Parenting, setting limits, Toddler conflicts. Bookmark the permalink.

31 Responses to Coping With a Limit Tester

I'd love to hear your thoughts. Cancel reply